Celebrating the feeling of excitement that comes with owning your new home, Halifax’s latest advert follows a toy moving into a new house with its family, all to the beat of the uplifting classic 70’s track ‘Jungle Boogie’.

The campaign from adam&eveDDB, was directed by The Sacred Egg through Riff Raff Films with MPC leading on the VFX. 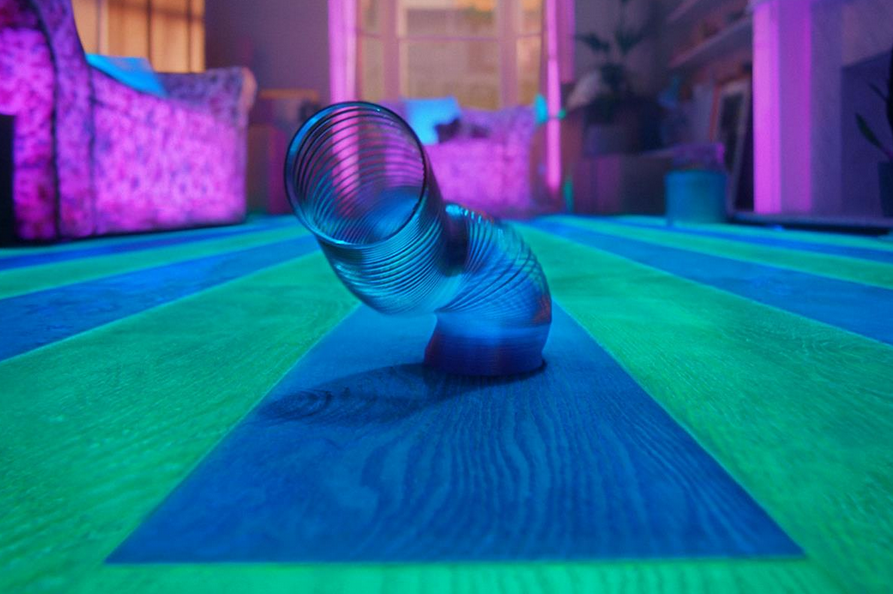 MPC’s VFX Supervisor Alex Lovejoy described how the energetic, dancing toy, came to life via a combination of puppetry and CG: “The director’s wanted to film the toy in camera as much as possible, however early tests with the puppeteers soon showed there would be restrictions with some of its movements – such as when the toy walks down the stairs and through the hallway. The decision was made to support the live action with CG.”

Fabian Frank, Head of Creature Development at MPC led the CG, replicating and modelling the in-camera toy: “What was cool was how the in-camera puppeteering and CG complemented each other so well.”

On some of the challenges he added: “It was tricky to find the balance between this being a physical object that had to react to the laws of physics but is also a living thing. We needed to find a way to add that character whilst basing it in reality. We did a lot of previs work at the beginning to figure out how to give the toy it’s attitude and the animation in its walk.”

The toy may have been the star of the show, but plenty of additional VFX work was involved in bringing the joy-filled spot together. Alex Lovejoy gave an insight into how some of the pivotal scenes came about: “In the scene where the toy jumps onto the counter and gets stuck on the pizza, we did a pass on set where we gave the pizza box a wiggle by hand and then animated the pizza slices to make it look like the slinky was really stuck in the cheese.”

When the toy glides through the hallway and the floor tiles light up, the team at MPC worked closely with the director and the production designer to figure out how this could be achieved. “The solution was to build a set 4ft off the ground so that led lights could be built in to light up the ground. A lot of motion tests were done early on as proof of concept and to work out the beat of the toy with the music” explained Alex.

For the living room scene it was not possible to light a wooden floorboard from underneath so the production designer Nathan Parker decided to light the floorboards with a projector from above. The background and the view out the window were added in later.

The end shot street exterior was shot on a snowy day in January. The team were tasked with the extensive job of removing the snow in post and creating the warm sunny evening you see at the end of the spot.

Excitingly, this is the first advert to be shown in British cinema’s on the Screen X format – a massive 270 degree cinema screen.  The center screen was the only part that was shot, so the team were tasked with finding a solution to extending the footage to fit a Screen X format.  An initial visit to the new cinema helped decide which shots were best to extend for the side screens. Using reference photography from set & re-modelling the scene’s in CG the team were able to build the missing pieces.

In addition to the Screen X content, the team at MPC were responsible for creating multiple digital assets for the campaign including Facebook content, escalator ribbons to be shown in major underground stations and bespoke animations for rotating screens at Lakeside Shopping Centre.