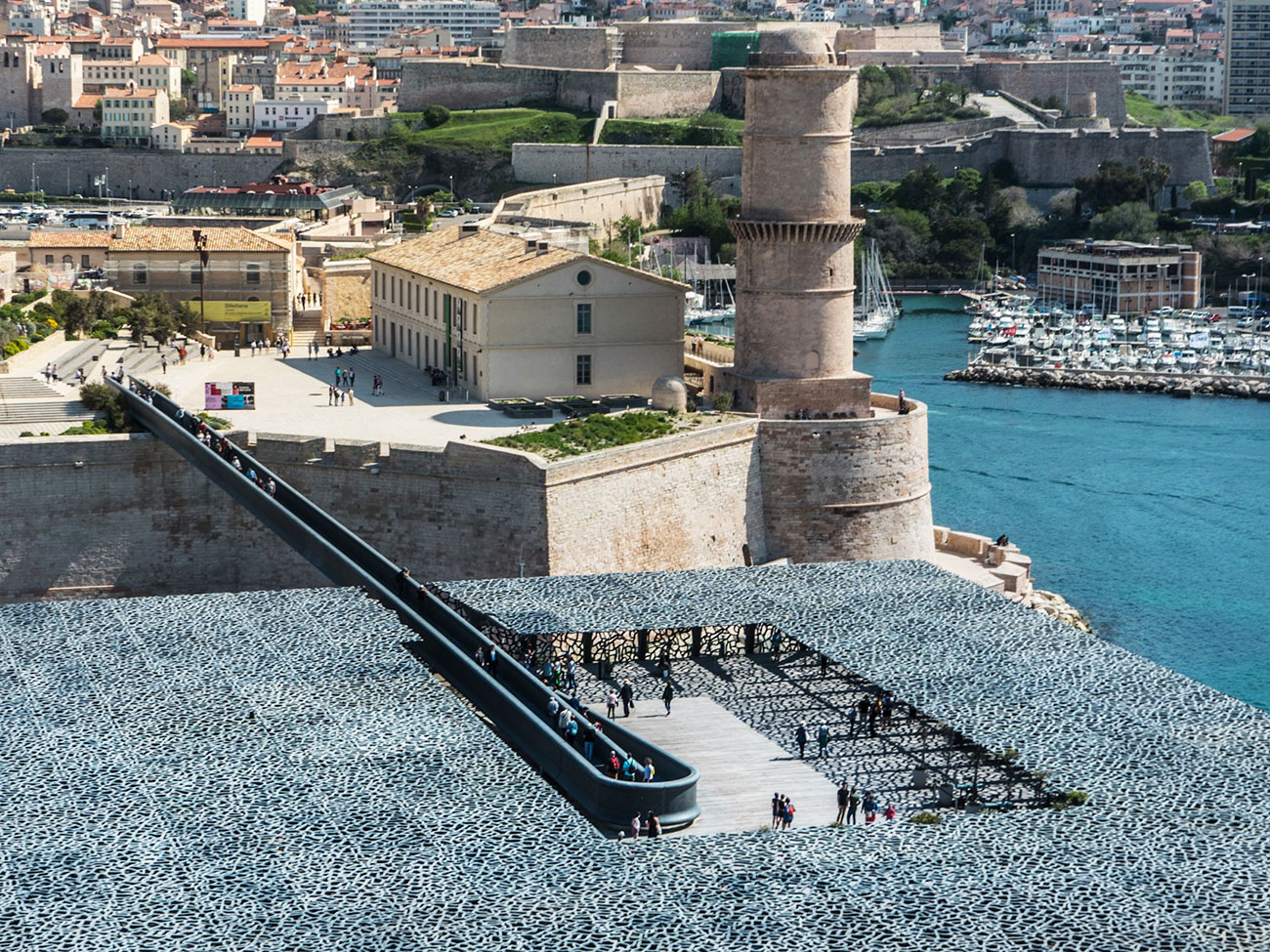 INTERACTING WITH 2,600 YEARS OF MARSEILLE HISTORY

The MUCEM (Musée des Civilisations et de la Méditerranée) is a unique museum that recounts, analyses and sheds light on the ancient foundations of this cradle of civilization and the tensions running through it since that time, all in the same place and with the same passion. Also that it is a platform for discussions about Mediterranean issues.

Both its exhibitions and its cultural programmes offer a multidisciplinary vision that combines anthropology, history, archaeology, art history and contemporary art to show the public the multiple facets of the Mediterranean world and its ongoing dialogue with Europe. 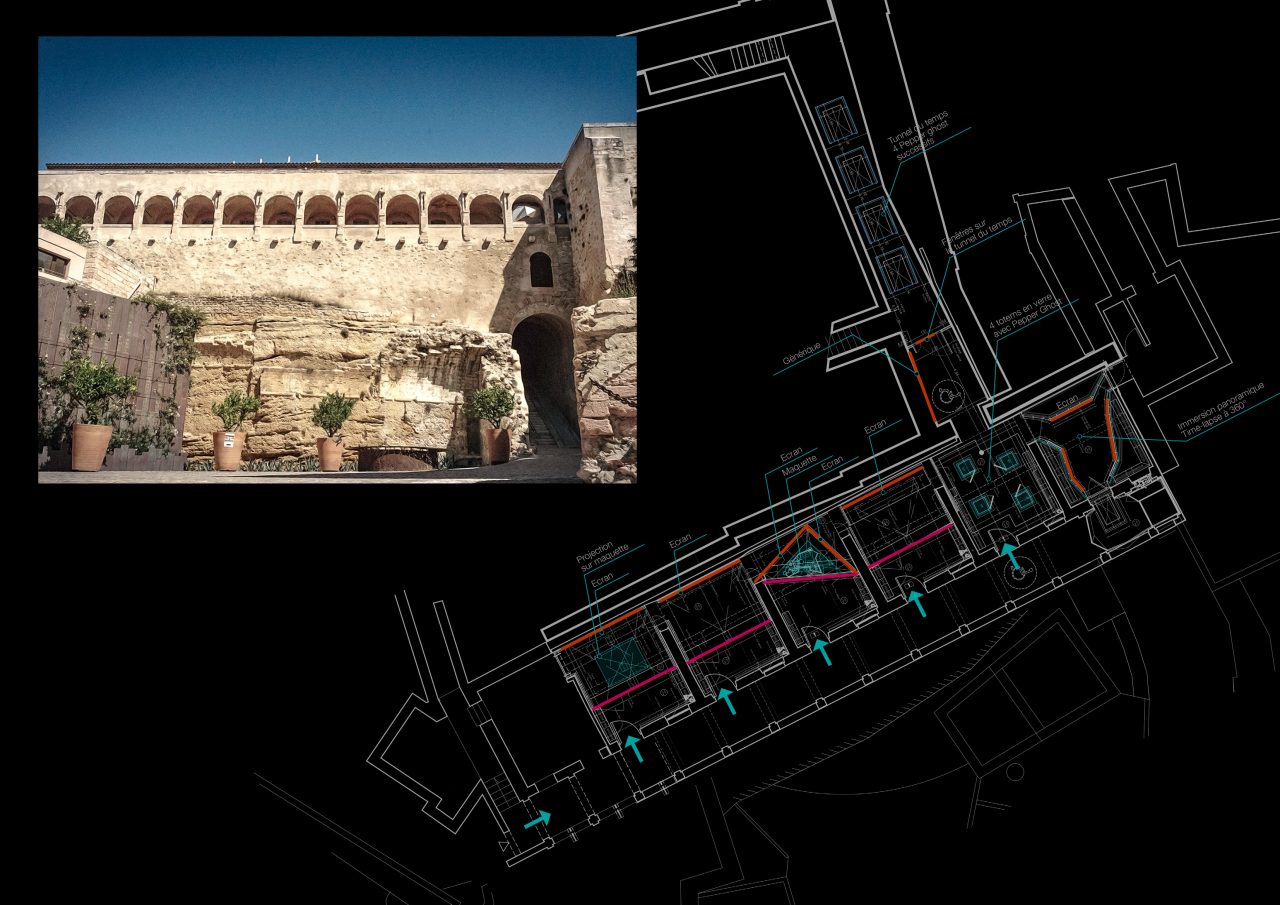 At summer 2018, the museum opened a new expo area in the Galleries des Officiers of the Fort Saint-Jean that aimed at presenting the history of this fortress from its origins to the opening of the museum. To achieve this, the museum launched a public tender as from 2016 for the creation and production of seven digital art installations that would depict 2,6000 years of the history of Marseille through major events. Each installation would be presented in a dedicated room within the galleries of the fort, requiring that the visitors’ experience should be thought as a journey in history.

The teams of Mikros MPC led by Hugo Allart, Head of Production, met the challenge with their original proposition on every aspect – technical, artistic and financial.

“For this incredible project, we had to bear multiple caps: producer, director, content producer and post-producer as well as technical developer. This gave us the freedom to propose a didactical approach for the various pieces of art while optimizing the production planning. Thierry Prieur and I had a direct collaboration with the curator of the exhibition and historians to adapt the initial script, propose historical archives to enrich the initial propositions, and rationalize the global project”, says Hugo Allart.

Each room presents a period of the history in different technical settings which entailed a real adaptation of the content creation to the different formats. A true challenge to the artistic teams who used 3D animation, matte painting, motion design, drone-shot movies and took care of the integration of texts and sound for the content of each installation as well as the transition animation from one to the other:

“From the Immemorial – Discovering the Fort Saint-Jean”

Two synchronized projections, one against a background screen and one over a scale model of the topography of the piece of land where the “Fort Saint Jean” has been built, depicting the evolution of the building over years. 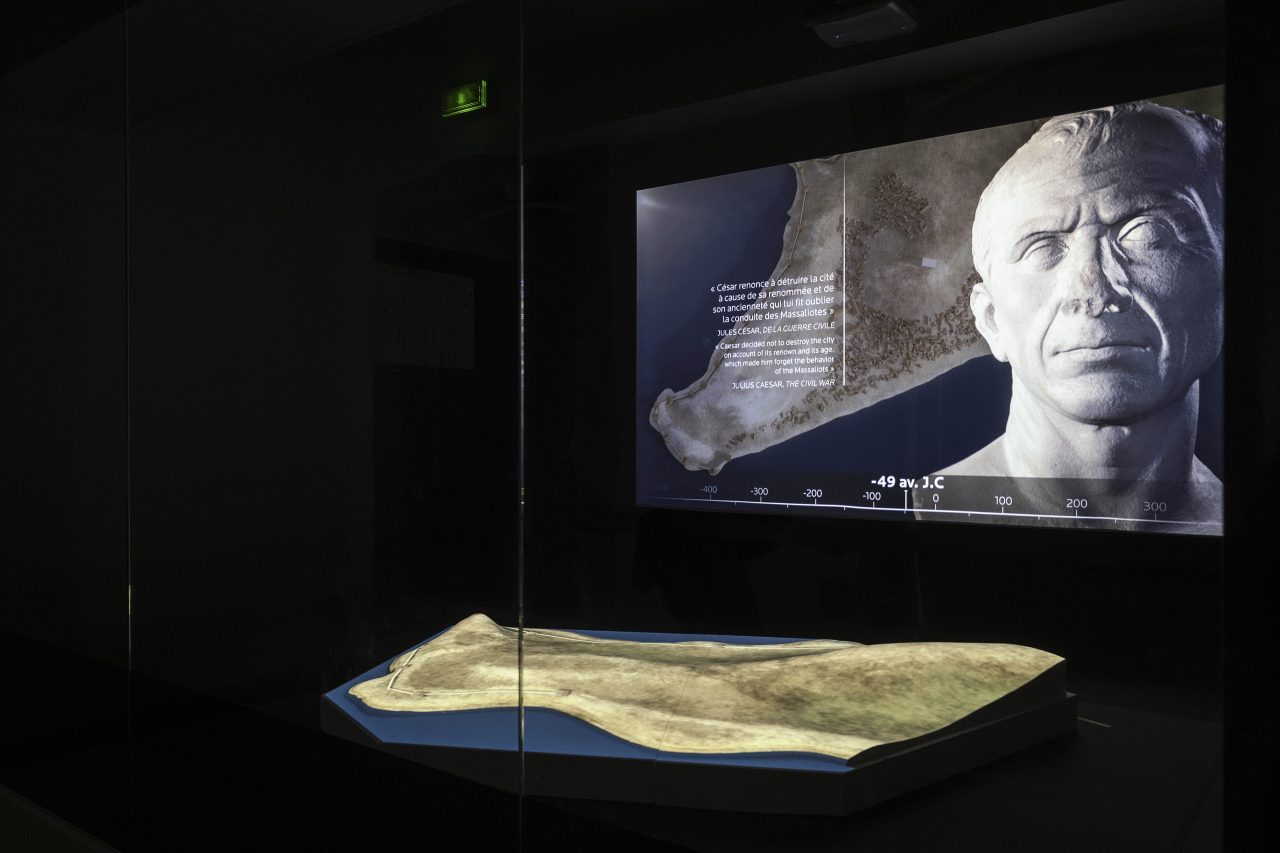 Regular projections on a background screen. 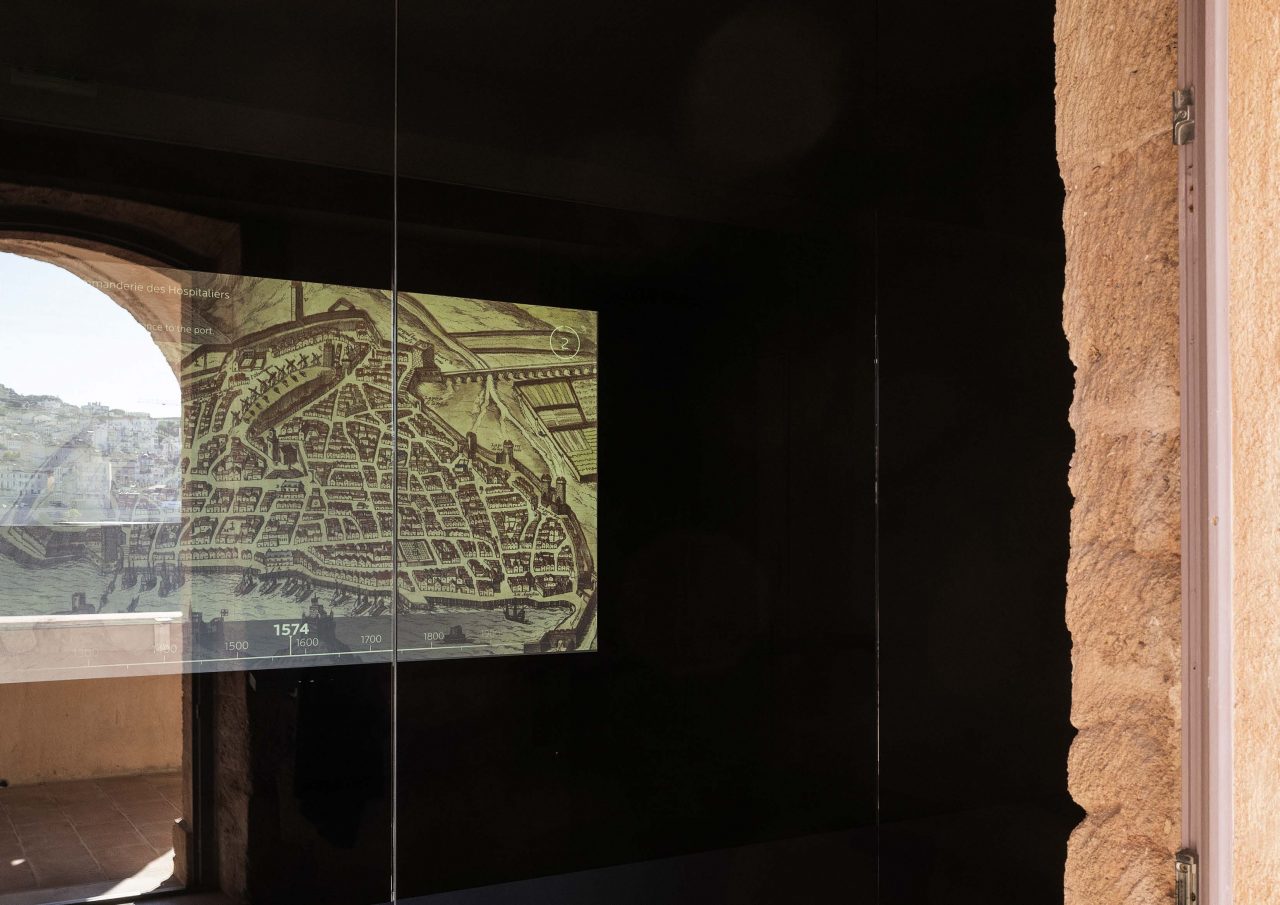 Animated movie projected on two screens placed in an angle and a model of the Vauban fortress which leds get lit in synchronization with the content on the screens. 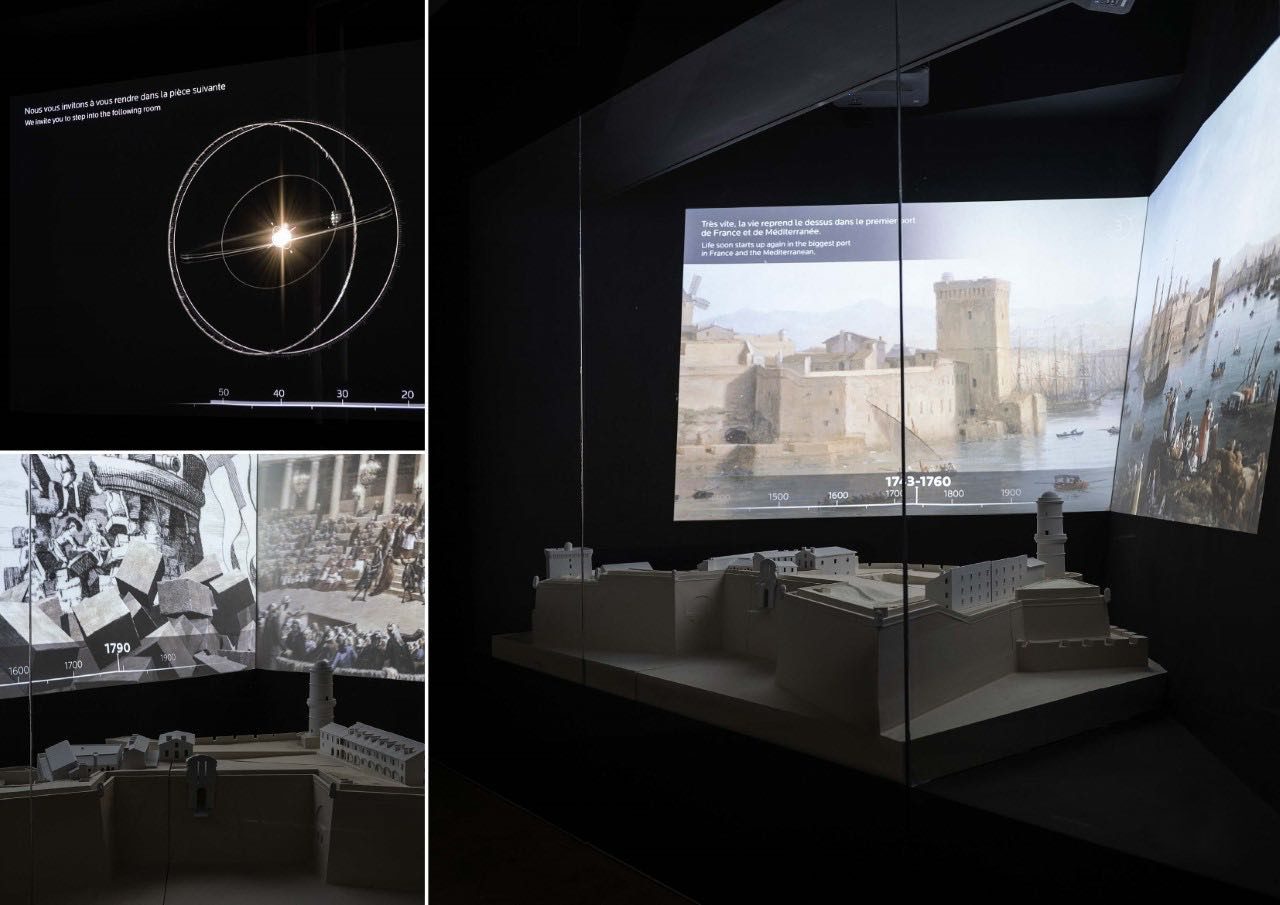 “The Fort Saint-Jean as seen by artitsts”

Four window displays featuring paper ghost animations. Two of them present CGI animation sequences of the architecture of the Fanal Tower and the King René Tower with which visitors can interact with, thanks to gesture control of the video stream.

“A museum opens up to the city”

360° video experience showcasing a time-lapse video shot from “La tour du Fanal” and MUCEM private places that are not accessible to the public (collections storage, underground,etc).

A hallway of an overlay of 4 paper ghost screens that present a time tunnel experience.

The exhibition is opened until July 2021, so run discover how Mikros MPC takes history to an engaging and immersive experience.