Fans of the FX hit show Legion had the opportunity to tap into the mind of Marvel comic character David Haller at the FXhibition during San Diego Comic Con 2017.

Using Microsoft Hololens, audiences were emerged into a world of mixed reality to discover a memory during questioning. Much like the show, one finds themselves becoming confused and disoriented – not knowing whether or not the memory holds authenticity to the character. With help from girlfriend Syd, the truth is revealed – and the adventure begins.

The Sessions experience drops the audience into the narrative of David, creating an unforgettable immersive experience for lovers of the show plot lines. Mixing reality by using interactive objects and animation with live actors and physical environments, MPC worked closely with Here Be Dragons and Director Justin Denton to bring this new category of sensory experience to life.

The experience included interactive Hololens components driven by a tablet based state machine that ran the complete choreography of the installation, such as lights & audio.  The team at MPC included designers and developers, working on every aspect of the experience hand in hand with Justin Denton. 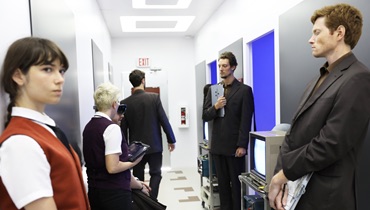