Mikros MPC collaborated with Fondation de France on the 2019 holiday campaign of the Galeries Lafayette, the famous Parisian department store. Fondation de France has came up with a truly first of its kind campaign, bringing the world’s first insect social media ‘influencer’ named B. to life for the first time.

Created by Fondation de France in June 2019 along with the BEEFUND, B. has been building a following on Instagram to raise public awareness and funds from companies to fight against bee extinction in France. The more followers B. gains, the more funds the BEEFUND collects from its partners to finance its projects. Galeries Lafayette is the first brand to feature B in an advert.

The campaign spans print, web, social media coverage, direct mailing as well as shop window and POS decoration and animation, for which the official unveiling has become a greatly awaited yearly rendez-vous for press and customers.

Mikros MPC worked on the hero spot and various iterations (30s, 15s and 5s) to design and animate the central character, B. Up until this point B. had only existing in still photos. The team at Mikros MPC needed to find the right balance between realism and enchantment in order to match the poetic tone of this advertisement. Artists at Mikros MPC used the plethora of still images from the Instagam account and adapted those into 3D assets to recreate the characteristics. 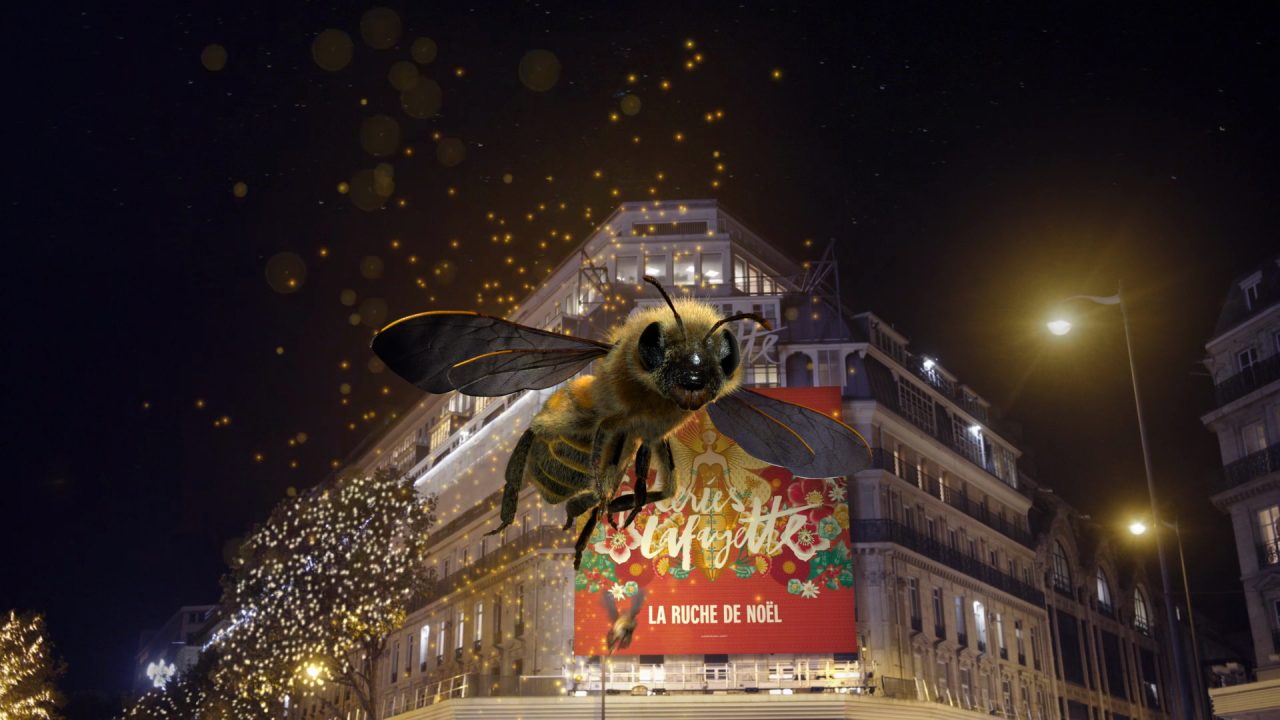 The photorealism the bee has been enhanced with particles to strengthen its ‘tinkerbell’ aspect – including gold flakes when she flies and dust falling over real shots of Paris. To achieve this, the motion design and animation of the particles had to match the movements of the character, which required an adaptation of the production workflows. From an artistic standpoint, it was crucial for the audience to identify with the character, the same way an Instagramer would do with an influencer.

“Working on this project has been a real blast for our teams as it combines two of our core specialties: mascots design & animation and motion design. And it’s even nicer when it’s done in the context of supporting a biodiversity cause!  We were amazed that B. managed to gain 100k followers on Instagram within 20 days with fixed images only. We are looking forward to seeing what happens to the account with the full campaign in market. When we were contacted to help amplifying the visibility of B., it became quite obvious to us that our collaboration with Fondation de France would be successful by creating the very first 3D assets of this character, particularly in the context of their partnership with such a famous brand as Galeries Lafayette,” says Lionel Juglair, Head of Executive Production at Mikros MPC.