Throughout the month our artists across the global studios share insights and BTS footage behind MPC’s most iconic characters.

Next up, Fabian Frank, Head of Creature Development, depicts the creation of our unconventional ‘Wiggy the Toupee’ character for Virgin Australia. Pairing a silly (hair-raising?) concept with an earnest ballad makes for plenty of feel-good smiles in this spot called “Up, Up and Toupee”. You’d think the biggest challenge was simulating long hair, but designing a character without legs, arms or face from a bunch of hairs that the audience would engage with was the true challenge. Fabian explains…

Can you talk about the craft behind creating Wiggy?

What makes this project special to me is the unique character. It is something that has never been done before and posed quite a few technical and creative challenges. We started by developing the “look” on paper. Exploring different ideas with a pencil is so much quicker and easier than going straight into 3D. Striking the balance of a birdlike anatomy that would be able to fly but maintaining the look of the toupee was a big challenge. We ended up with two main and two secondary wings. The main wings would do the hard work to support its weight and the secondary wings functioned as stabilizers.

The main technical hurdle we had to overcome was the dynamic hair simulation. The strands of the hair had to maintain the wing shape but also feel loose and flutter in the wind. We developed a few tools that enabled us to art direct the look of the simulated hair per shot. This was quite important to support the story as well. When the toupee was gliding, being very relaxed, all the hair was loose and fluttered in the wind. As the energy ramped up and the animation got more playful the hair would tighten and be closer to a wing shape.

How did you get Wiggy’s personality right and differentiate from previous characters?

I don’t think anyone has done a flying toupee before, so the brief was quite open. For the clients, the key story was to portrait a character that spreads its wings and finds its confidence throughout the journey finishing in a playful full CG sequence above the clouds before returning home. To convey this progression of personality through animation we worked closely with the director. We didn’t want to add any facial expressions to convey emotions, so we only relied on body performance and strong posing. Painting up key styleframe of the storyboards really helped to establish the character early on and start a conversation about poses, expressions, and framings before setting the first key frame.

What was the biggest challenge when creating Wiggy?

Besides the technical challenges of simulating long hair the design was the biggest challenge.
We had to develop a character that can be expressive enough to tell a story as well as look and behave like real hair. Breaking down the script and story points really helped to understand what we needed to achieve. One of our main references was the magic carpet in Disney’s 1992 animated feature film, Aladdin. It’s quite fascinating how much personality one can achieve with strong poses and expressive body animation.

What was the most important feature of a Wiggy and why?

I love how the middle parting is creating some little eyebrows. It is very subtle and only visible in a few shots for a brief moment when a gust of wind lifts them but those sorts of details add so much charm to a character.

Where do you see the future going for CG characters?

I’m really excited about the future of CG characters. CGI has come a long way in the last decade. Not only has quality increased but turnaround times have decreased. What would have taken hours and hours to render a few years ago can be turned around a lot quicker nowadays. This means adapting to new demands and creating content gets faster and more efficient, giving us and the clients more freedom to focus on the creative part rather than being restricted by technical limitations. Additionally, to the traditional VFX work new technologies like real-time and VR play an increasing role in CGI content creation. Characters created for a TVC can be adapted to work in real-time or VR applications giving brands a broad spectrum of possible media strategies.

What sort of research and time is involved? How well do you have to understand the animal or human anatomy?

Usually, anatomical research is a big part of the creature development. This ranges from studying skeletons and muscle layouts to detailed imagery of fur and textures. In this particular case we had to follow the “anatomy” of a toupee. There was a real toupee made by a make up artist which was used at the start and end of the commercial. This was a great reference for us, and we learned more about toupee making than we could have hoped for. 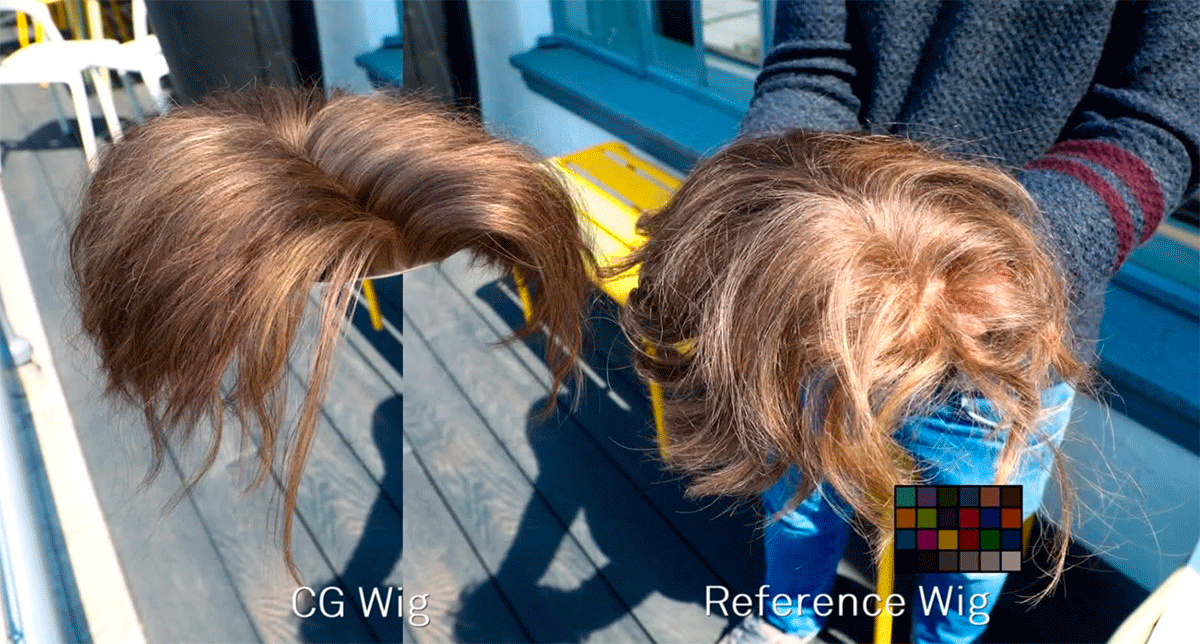 How did you give the character a ‘human’ feel and create the emotional connection?

Strong posing and accentuated animation is key. Especially with a character that doesn’t have arms, legs or a face. Traditional animation has explored this many times, for example the carpet in Aladdin or the famous Pixar Lamp. Portraying a progression of a character’s personality makes it more interesting and easier to engage with. Especially showing flaws and struggle. The toupee really struggled to fly in the first few shots and had to find it’s confidence first. No one is an expert at the beginning – everyone can relate to that. This makes us, as an audience, interested in the journey ahead and we want to tag along and know what’s happening next.

How did you balance realism with of the character and the potential over expressiveness of a CG Creature?

We were able to be very creative and playful with the animation. It is not a character that exists or that anyone has seen before so you get away with a lot more expressiveness than when creating a photoreal animal. But we focused on keeping the physics of our animation based on real world references of birds. Additionally a lot of the realism comes from the physically accurate hair shading and simulation.

What do you enjoy about CG creature work?

I have been very fortunate to work on quite a few MPC characters over the last 10 years. Every project was unique and challenging, not only technically but also creatively. One of my personal highlights was a research trip to the archives of the National Museum of Scotland just outside of Edinburgh. Being able to browse through their vast catalogue of skeletons and skins as well as talking to the experts in their respective field was truly fascinating.

Who’s your inner self character and why?

Not sure but maybe a flying toupee isn’t far off.