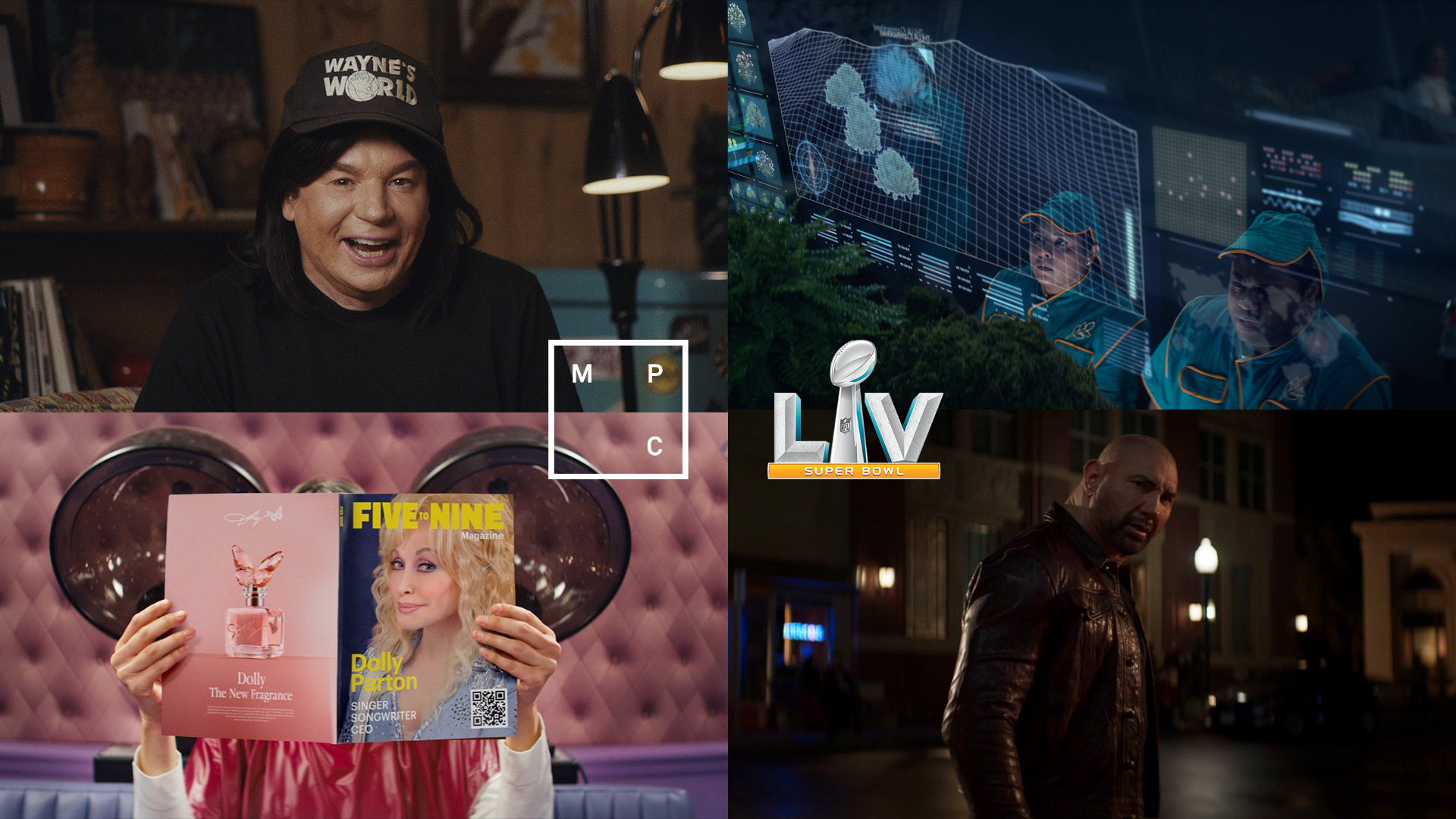 At MPC Super Bowl Sunday is all about the commercials

Apart from the impressive display of athleticism, Super Bowl ads are easily the best part of game night, and this year was no different.

During Super Bowl LV, our teams brought you everything from Dolly Parton’s signature wink to Tracy Morgan jumping out of a plane. There were also uplifting moments, with an Uber Eats commercial featuring a shameless culture clash cameo featuring Wayne’s World with Cardi B and Fiverr’s spin on one of the biggest memes of 2020 with the Philadelphia-based Four Seasons Total Landscaping company.

After a tough year, 2021 commercials saw a clear theme, with brands going heavy on nostalgia, featuring movies, songs and characters from decades ago.

As reported by the LA Times, the big game has topped 100 million viewers for the last nine years. The skyrocket ratings for the Super Bowl make it the prime venue for advertisers who want to make a major impact with their brands. With an average of $5.25 million for a 30-second spot, total ad revenue for the big game was expected to top $358 million.

Congratulations to all of our creative collaborators on this year’s event. Take a look at some of the amusing and downright strange #biggame commercials our artists helped to craft and stay tuned for more details.

In true Super Bowl fashion, comedic superstar, Tracy Morgan, takes things to the extreme in two Super Bowl spots by Rocket Mortgage. In the films, the world will join Tracy and a few new friends on a wild, hilarious ride, brought to life by our teams in Los Angeles, New York and Bangalore.

Our teams crafted high-end VFX and created the engaging scenes featuring a family swimming with sharks, skydiving, and UFO’s blowing up streets.

“With their industry-leading technology and attention to detail, the MPC visual effects team knocked it out of the park and brought Rocket Mortgage and Highdive’s creative vision to life,” said Highdive Co-Founder and Co-Chief Creative Officer, Mark Gross. “The partnership with their team enabled us to really push the boundaries and develop not one, but two Super Bowl spots that we’re all incredibly proud to share.”

We’re thrilled to see the ad placed first and second in USA TODAY’s Ad Meter, which ranks commercials by consumer rating with panellists scoring each ad on a 1-to-10 scale.

One of the most talked-about adverts was country star Dolly Parton’s reworking of her hit song “9-5”. In this ad spot by Oscar-winning director Damien Chazelle, Parton promotes Squarespace by urging viewers to follow their passions “5-9”. With travel restrictions effecting live shoots, our VFX geniuses were able to bring Dolly’s face to screens.

“I loved the idea of taking my song ‘9 to 5’ and mixing it up for a new Squarespace campaign. That’s the beauty of music, it is always changing and growing to meet the world around it. There’s a whole new generation of people out there ready to change the world, to meet the growing needs that they see, and I think Squarespace is going to be there with them every step of the way.” – Dolly Parton

Mike Myers and Dana Carvey take a walk down memory lane when they step back into the shoes of their iconic Wayne’s World characters the new Super Bowl commercial. Joining them in the shameless celebrity cameo, is Cardi B who flexes her hair and injects her infectious personality, as they look to encourage viewers to eat local in support of restaurants struggling during the COVID-19 pandemic.

The ‘Culture clash’ spots by Special Group U.S. and Australia, are directed by Guy Shelmerdine at Smuggler and feature colour grade by MPC’s Dimitri Zola.

The commercial revieved 5* by David Reviews

The spot, by Publicis, is directed by Nick Ball, and features colour grade by Ricky Gausis.

The commercial revieved 5* by David Reviews